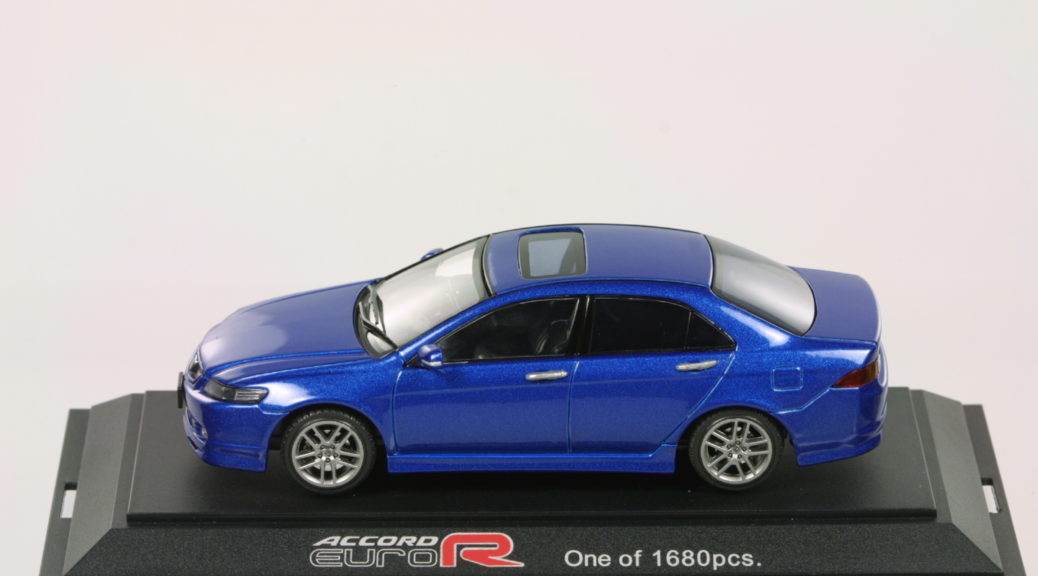 Ebbro has released 3 versions of the 2003 Euro Accord – in normal sedan and Type R sedan forms and subsequently in wagon/Tourer form. All the models are RHD for the Japanese Domestic Market. The regular sedan was also rebadged as the Acura TSX in the US.

The tampos and badges are sharp and nicely scaled. The interiors are amazingly detailed considering there are no opening doors and the side and rear windows are tinted – Ebbro didn’t have to go to the level of detail.

Further below, you’ll also see the Honda boxed versions which are essentially the same Ebbro model in a different box. It would have been good if Honda at least differentiated the models with alternate interior colors or factory options like accessory wheels or may be with untinted windows.

Although the edition sizes were reasonable, the number of colors available meant that there are over 10,000 of this model on the market. What we don’t know are the Honda boxed production numbers.

The Euro R Accord

The Euro R is differentiated even in the model by black window trim, Euro R split 5 spoke wheels, additional aero skirts front, side and rear.


Premium White Pearl (43441). The actual car was not considered to be a “Type R” but rather a “Euro R” and hence was never available in the traditional Championship White.
Milano Red (43439)

The JDM/Euro Accord was never sold in the USA as a Honda. Although originally released in just three colors, Ebbro eventually covered all the factory colors with the stock OEM wheels are good detail for a model released in the 2003 timeframe.
Brilliant White Pearl (43280)

Honda UK Boxed versions surprisingly marked as Made in Hong Kong on the box labels.